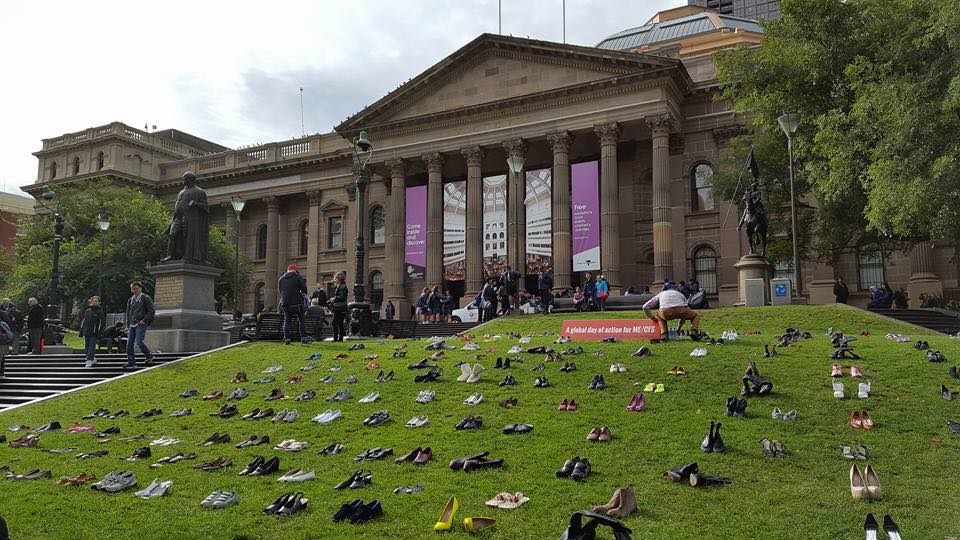 In Melbourne, hundreds of shoes were placed on the lawn in front of the Victoria State Library (Photo credit: Karyn Adams)

On May 25, 2016, protesters all around the globe gathered to demand greater recognition and research funding for ME/CFS. Simultaneous protests were held in Melbourne, Australia; London, England; Belfast, Ireland, Ottawa, Canada; and in Boston, Washington, DC, Seattle, San Francisco, Dallas, Raleigh, Atlanta. and Philadelphia in the U.S. It was the largest protest ever held for this disease, involving thousands of participants worldwide.

The MillionsMissing protest was organized by MEAction and coordinated by a group of dedicated advocates in order to highlight the long neglect of patients with ME and CFS. Millions missing represents the missing millions of dollars of research funding that should have been spent to find a cause and a cure. Millions missing also represents the millions of people who are missing their careers, their families, their friends, and their lives due to the ravages of a disease that can disable a sufferer for decades.

In most of these demonstrations, a display of shoes, sometimes in the hundreds, was laid out to symbolize missing patients who, due to illness, could not protest in person. Virtual demonstrations – pictures of shoes placed in driveways, on doorsteps, and on walkways accompanied by personal notes– were held in tandem. The virtual protest generated over 10,000 tweets with the hashtag #MillionsMissing as well as thousands of posts on Facebook.

MillionsMissing holds largest ever protest for ME/CFS
Scroll to top